The Premier League duo of Arsenal and Newcastle United have been linked with a move for Napoli striker Victor Osimhen between this week and the end of the January transfer window at the start of next week. A lot of news outlet especially in Italy have reported the interest of the two Premier League sides in the striker who missed the Super Eagles of Nigeria squad to the ongoing AFCON tournament due to a facial injury. 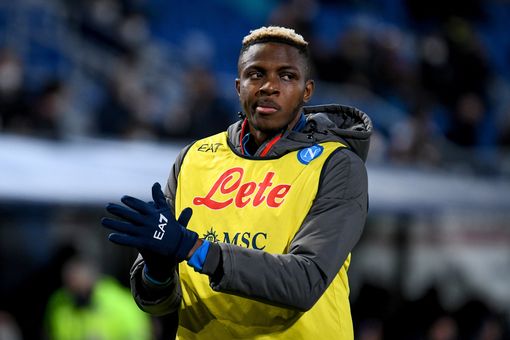 Osimhen was not part of the squad under Austin ‘Cerezo’ Eguaveon. Nigeria didn’t do well at the AFCON tournament after they were eliminated by the Tunisians at the round of 16 stage. Nigeria won all their three Group D games only to lose 1-0 to the Tunisians who advanced into the quarterfinals where they will face Burkina Faso.

The specific report from Italian publication Gazzetta dello Sport said that Newcastle United and Arsenal have turned their focus on Osimhen after missing out on Vlahovic. Young Serbian striker Vlahovic has left Fiorentina to join fellow Italian Serie A team Juventus. The Old Lady confirmed the Vlahovic signing on Friday evening.

Newcastle United are in the midst of a relegation battle and are struggling to sign quality players. On their part, Arsenal are in the hunt for a place in the Champions League next season. Only a top-four place at the end of this Premier League season will seal a Champions League return for the Gunners after a five-year hiatus.

Napoli paid around €80m to sign Nigerian striker Osimhen from French champions Lille almost two years, but the aforementioned report disclosed that club owner Aurelio De Laurentiis would be willing to settle for lesser than the fee paid to sign in 2020. The Napoli supremo wants €70m for the 23-year-old attacker who has scored nine goals in 16 games in all competitions this season.